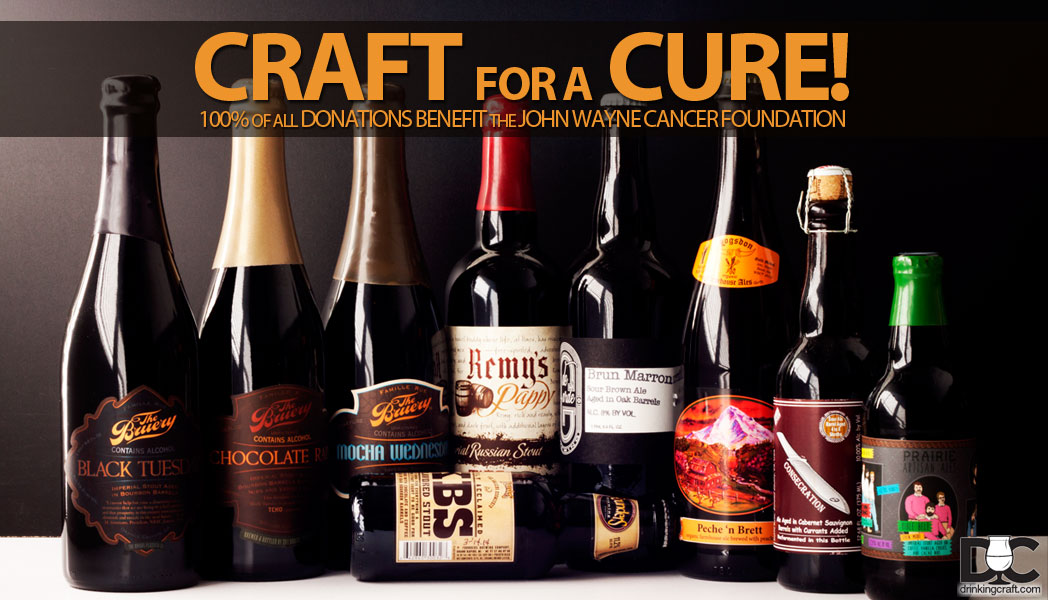 Craft For A Cure Bottle Opener Join DrinkingCraft.com in their 1st fundraising event to help raise money for the John Wayne Cancer Foundation to FIGHT CANCER!

My wife and I are doing a 3 hour indoor cycling event to benefit the John Wayne Cancer Foundation and since DrinkingCraft.com has been such a big part of my life we thought we would extend the charity event to the craft beer community.  The craft beer community is always so strong in helping others we thought one of the best ways we could thank you was by getting together some amazing craft beer packages and prizes.

Bullets2Bandages , The Beer Exchange, Ken Reid at Farmers Insurance, and DrinkingCraft.com have all put together some great prizes for you, as a THANK YOU, for your donation.

Here are the contest details:

We are currently still accepting donations to be added to the current boxes or if you would like to donate a prize or additional box please contact us!!

Box One Donated By: DrinkingCraft.com

5 custom engraved .50 caliber Bullet Bottle Openers will be given out to 5 different entries!

About The Beer Exchange
The first web application dedicated to craftbeer trading. Find trade partners, manage trades, and build your reputation. The best way to trade and share beer.
www.TheBeerExchange.io – A better way to trade beer

About Patrick Curme
Patrick Curme is a home brewer, beer enthusiast, and beer writer from Minneapolis.  A proud member of the Primary Fermenters & Vinters of MN Homebrew Club and volunteer for the Movember Foundation, Patrick’s donating this beer spread in memory of his father Ron and his family friend Ed Miller.’ Can be found on Twitter @pattenuated, raising money for Movember mobro.co/Curme, and is an Ambassador for The Beer Exchange!