Some of us are IPA people. Some of us are stout people. But no matter your preference in beer style, there’s one style that you have the utmost respect for: Belgians.

This recipe showcases Belgian beer in a way that few recipes can.

It’s a traditional Belgian beef and onion stew that heavily uses the beer. This recipe calls for Ommegang’s Abbey Ale, which has a sweetness, perfect for the flavor profile of the rich beef and bacon. Though, you can also try it with Flemish reds.

Traditional, yes. But we’ve translated it into a slow cooker recipe so it’s easier to achieve these heartily delicious results. Just a little prep work, then you can throw all of the ingredients into the Crock Pot and just walk away.

Come home from work and serve the stew over some french fries with a large goblet of ale and you will be eating like a king. 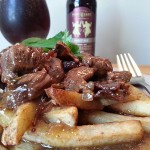 Packed with sweet and sour flavors and served over piping hot and crispy frites.

In a skillet, melt 2 tbsp butter over medium heat. Add in garlic and onions. Cook 5-8 minutes until they begin to brown. Add to slow cooker, leave drippings at the bottom of pan. Return pan to flame.

Melt remaining 2 tbsp of butter. Season beef with salt and pepper. Toss it in the flour and throw into preheated skillet. Cook for 2 minutes to brown, stir and cook an additional 2 minutes. Add to slow cooker, drippings and all. You can use a ¼ cup of your beef stock or ale to deglaze the pan if you still have yummy bits left in there.

Add in ale, beef stock, brown sugar, dijon, thyme and bay leaf. Cover and cook on low for 6-8 hours or on high for 3-4 hours.

Add in bacon. Salt and pepper to taste.

Replace the lid and cook for another half hour.

Stew will be thick. Serve over french fries and garnish with fresh parsley. Serve along side a Belgian ale.