Greetings Everyone, I’m Tyler, a Certified Cicerone ® working in the craft beer industry in Philadelphia. Craft beer, good food, traveling and photography are my passions. Growing up I realized at a young age that food was a very important part of my family’s culture and has translated into my adult life working in the craft beer industry because as you know, good food and good beer go hand in hand. Growing up my father was always working on projects at home after work and many of those projects were homebrewing. I can vividly remember the first time I smelled the wort while my father was mashing in.  It is a smell that reminds me of my father homebrewing to this day and one that I don’t think will ever grow old. I didn’t realize it at the time, that my childhood influences would end becoming both my career and my passion. One of the perks of working in the industry is the ability to attend the best beer related events throughout the country.  Recently, I was able to attend Extreme Beer Fest and several up and coming breweries that have been on my radar. Here are my thoughts: Extreme Beerfest

My Top 10 Beers from the festival

After surviving the Friday night session I woke up early on Saturday to take buyers and friends to the Barrel Room at the Samuel Adams Boston Brewery to try their uncarbonated funky Belgian Ale known as Kosmic MotherFunk.  KMF has all 3 strains of Brett, and is aged for up to 18 months in Hungarian Oak Foedrs. The barrel room also houses a large number of barrels which age Utopias, Triple Bock, and Millennium. It is a pretty awesome sight to see the sheer number of these barrels. Tree House Brewing After we finished drinking KMF directly from the Foedrs we hit the road and took a 90 minute drive to Tree House Brewing.  I must admit it’s a beautiful drive on the way through the Western Massachusetts Countryside. Once you see the big beautiful red building you know you have arrived at Tree House.  The craftsmanship that went into the tasting room was extremely impressive with the woodwork being impeccable and the aroma of cedar filling the air. The room has a very rustic feel that made me feel comfortable and put me at ease. The staff was extremely friendly, knowledgeable and to say they are passionate about their beer would be an understatement.  I grabbed a couple growlers of Eureka (Hoppy Blonde W/ Citra) and hit the road to Jacks Abby. Jacks Abby   A little over an hour back towards Boston we arrived at Jacks Abby Brewing. A few months back I was able to score some Kiwi Rising, their dank New Zealand Hopped Double IPL, so I was definitely excited to see what they had in store in their tasting room. When we walked in it was a packed house, which didn’t surprise me knowing that they put out some incredible Lagers. I started off with the Jabby Brau (Session Lager) before making my way to Mass Rising (Double IPL).  Jabby Brau was excellent with a nice floral/citrusy nose, lightly toasty/bready malts and just enough hop bitterness to play off the malt. I could easily see myself throwing back a couple during a long day of drinking. Although you can’t sample any of the bottles you buy in the tasting room, their fantastic draft list made up for that. They offer flights as well as drafts in a variety of pour sizes which should accommodate most.  Needless to say, I was happy I had the chance to visit. Trillium Brewing Co. Trillium Brewing 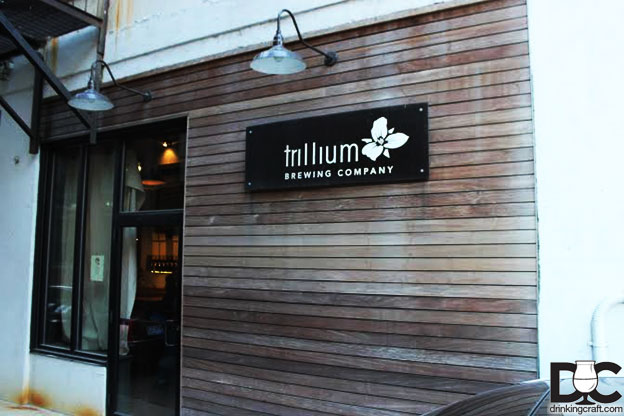 Our last stop of the day was Trillium Brewing Company. We left Jack’s Abby around 4:30pm hoping to make it to Trillium by 5:15pm. However, we hit traffic on our way and I was forced to exit the vehicle and run four blocks, hitting the front door at exactly 5:59pm. Although I walked through the door one minute before they closed up shop I was still able to fill numerous growlers due to their extremely friendly staff. While waiting for my growlers to be filled I was able to walk around and admire how beautiful their tasting room is. That Saturday happened to be the release of Mettle, a Double IPA in honor of their one year anniversary. I was also lucky enough to have tried their Fort Point Pale Ale earlier in the week which is an exceptional and juicy pale ale. Overall this was a great trip. I was able to try a lot of great beers at both the breweries and EBF. Stay tuned for my next blog which will feature my travels to the following breweries: Westbrook, Wicked Weed, Foothills and NoDa Brewing in North and South Carolina. To find out more about me follow me on Instagram @CharlieHustleHops
Categories
A Craft Beer LifeCraft + BeerPhiladelphia
Tagged
boston beerjacks abbysamuel adamstree house brewingtrillium brewing

Certified Cicerone® Born and Raised in Syracuse, NY. Currently reside, and work in the craft beer industry in Philadelphia, PA.