Bridge To Brews: Run For Beer (And A Great Cause).

by Jon Davidson and Kimberly Johnson of Brew Explorers.

Bridge To Brews. It’s one of Portland’s most popular races, and proof that people from all walks of life will run for beer. Great views, great brews, and a great cause. What more could a craft beer-loving runner ask for?

Beginning at Lillis-Albina Park in North Portland, the route crosses two bridges over the Willamette, winding through downtown and the Pearl District before returning to the park, where beers, live music, and free massages await. Expecting a flimsy plastic beer mug? Forget it. Bridge To Brews provides each participant with a nifty stainless steel cup. If you spring for the VIP Experience, your cup even comes with a handle. Take that, proletariat.

Runners and walkers travel from all over the Northwest to participate in this family-friendly event. Jeff and Maria V., of Seattle, running in their third consecutive Bridge To Brews, summed up their love for the event this way: “It’s the most fun run in the Northwest. Period. We’ll be back next year.”

THE RUN
This year’s run took place on Sunday, April 6, under overcast skies, and provided runners and walkers an 8K or 10K option. We opted for the 8K. Jon, who tore his Achilles tendon in February, wouldn’t let his temporary inability to walk stop him. 4,140 participants entered the race on two feet. Only one entered on a knee scooter. Bridge To Brews was also a first for Kimberly: her first-ever organized run. Naturally, she was a little apprehensive beforehand, but soon realized that thanks to Jon and his scooter, there was at least no way that she could finish last. We waited at the starting line for the slowest wave of runners, then rolled out.

Bridge To Brews is the only running/walking event that allows participants to cross the Fremont Bridge, the second-longest tied-arch bridge in the world, and we, along with many others, stopped to take pictures of the dramatic views of Portland and the Willamette that the bridge affords.

Pushing his knee scooter up the uphill side of the bridge’s 2,154′ span proved challenging for Jon, but he remained courageous. Careening down the downhill side, holding on for dear life, gripping flimsy just-for-show brakes, and dodging grates and potholes? Less courageous, more insane. Kimberly, meanwhile, ran ahead and took video of what could have been Jon’s final moments. Finally, we reached level ground once again.

The Fremont Bridge safely behind us, we completed the rest of the course, gulping Gatorade, taking in tunes from several live bands along the route, and pausing to take more pictures of Portland from the Broadway Bridge. Towards the end, it became very apparent to Jon that rolling 8K on a knee scooter was more demanding and more painful than the full marathon he ran on both feet last year. Thankfully, Kimberly’s encouragement and the siren call of craft beer spurred him to the finish line. THE BEERS
This year’s Brews portion of the event featured 18 beers from five breweries: Widmer, StormBreaker, Burnside, Lagunitas, and Laurelwood, as well as ciders from Reverend Nat’s and wine courtesy of Tesoaria Vineyard. Due to heavy rains the night before, the park’s once-green grass had been trampled into a seething mud pit by thousands of runners, and Jon didn’t want to get his walking boot anywhere near this quagmire. Kimberly kindly ventured into the sludge to bring Jon brews. Thankfully, we’d signed up for the VIP Experience, which not only got us the aforementioned handles on our mugs, but also a hot breakfast, mimosas, tables and chairs, and most importantly, concrete to stand on. We were aristocrats for the day.

We caught up with Dan Malech, co-owner of StormBreaker Brewing, one of Portland’s newest and fastest-growing breweries. Dan also happens to be a friend of ours and a fellow Achilles rupture survivor. “I’ve been running Bridge To Brews for six years,” Dan said. “When the event opened up to other breweries other than Widmer, I got excited, especially since it’s in StormBreaker’s backyard.” Dan ran the 10K, finishing with a time of 54:55, then hurried back to the StormBreaker booth to pour some beers, mingle, and enjoy a couple pints himself. “I love talking to people and getting the word out about StormBreaker, and this is the perfect event for it,” said Dan. 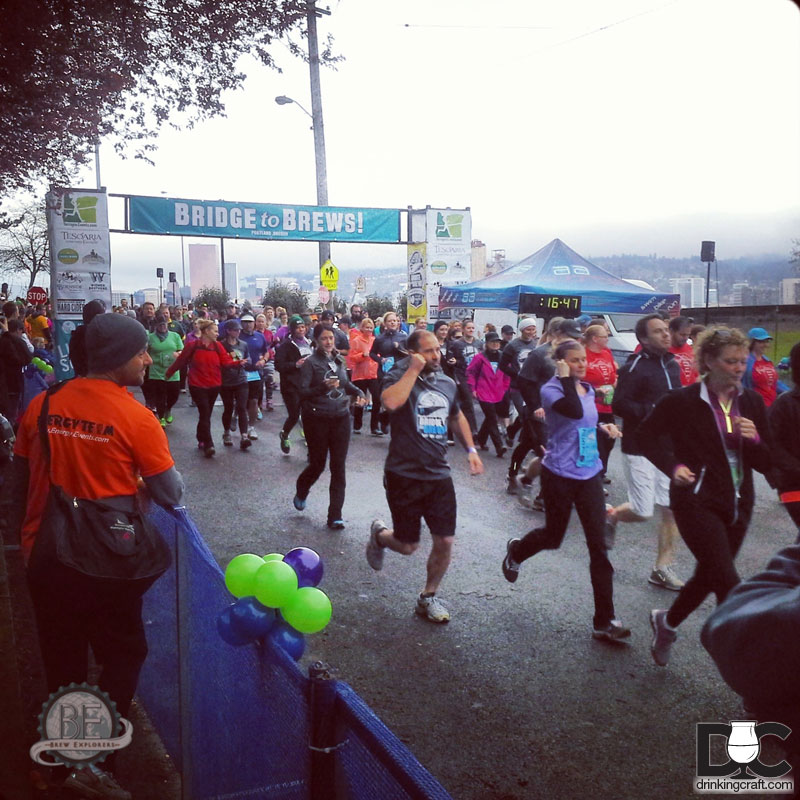 THE CAUSE
For the third year in a row, proceeds from Bridge to Brews go to Molly’s Fund Fighting Lupus, a local non-profit foundation with international reach. Molly’s Fund aims to inform the public about lupus and advocates for those with the disease by partnering with the community, medical organizations/professionals, and the insurance industry.

To learn more about lupus and Molly’s Fund, we spoke with Molly’s Fund Executive Director David Szyplinski, with board member and Lupus patient Julie Duvall, and with Molly herself, the young woman whose name adorns the fund and whose life has been forever changed by lupus. Their goal with partnering with organizations like Terrapin Events (which organizes Bridge to Brews) is to raise awareness of the disease, to advocate early diagnosis and understanding, and to raise funds for continual research toward finding a cure. In doing so, they aim to keep things fun, so that people are more apt to want to learn about lupus. Several years before, Julie created the slogan “Lupus Sucks,” and together they have created LuTus where runners supporting Molly’s Fund wear purple tutus to show solidarity. This year, Molly’s Fund had 25 runners run with LuTus. Next year, their goal is 500 runners.

Unless you or someone you know has lupus, you may not know that up to 1.5 million Americans, and 5 million people worldwide, are afflicted by some form of the disease.  Lupus is an autoimmune disease that, for unknown reasons, causes the immune system to attack the body’s own tissues and organs, including joints, kidneys, heart, lungs, brain, blood, and skin. Diagnosing lupus can be difficult because no two lupus patients are the same. Often, lupus hides behind other diseases as a shadow disease, causing those who are suffering with it to feel like hypochrondriacs before they are properly diagnosed.

How can you get involved? Run in an event supporting Molly’s Fund. Join the 100 runners already signed up to sport their LuTus in Run like Hell, which takes place October 26, 2014. Learn about lupus and tell your friends. Otherwise, plan to run in next year’s Bridge to Brews. In 2015, we are told the event will be bigger and even better than this year’s. With a wider variety of brews and a less muddy less muddy, Bridge to Brews will continue to be the running/beer event to attend in April in Portland.

Also, it’s important to know the cause associated with the event, and choose the event based on the cause you want to support. If you love to run/walk, do it for fun AND for a great cause!

All told, Bridge To Brews has something for everyone, and we highly recommend participating in 2015. We just might see you there!

We are Brew Explorers. We grab life by the beer, one adventure at a time. We have a beer, travel and adventure blog where we aim to inspire others to get out there and explore the world and the world of craft beer. Inspired by our consistent way of always finding ourselves in a local breweries sipping on new brews, and our constant wanderlust, we created Brew Explorers to follow our passions, to build a life and lifestyle that makes us rejoice every morning, and most importantly, to build a connection and community around the things we love.