Beer cheese soup. A Midwestern favorite. But why be satisfied with the standard? It’s time to take beer cheese soup to the next level. The addition of beef, bacon and homemade sesame seed croutons turns this average soup into a bacon cheeseburger flavor monstrosity.

A quick rule of thumb to note: don’t cook with beer you wouldn’t drink! That’s why this recipe calls for Bell’s Amber Ale instead of a wimpy generic light beer. The rich, malty flavors of the Amber Ale add a deliciously complex depth to the profile of the soup.

Nothing beats cheese, meat and beer! 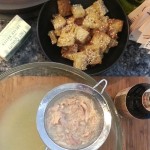 Prepping the ingredients for the Beer Bacon Cheeseburger Soup

In a stock pot or Dutch oven, melt butter. Add in garlic, onion, carrot and celery. Cook over medium-low heat until soft and fragrant (about 10 minutes).

Pour in the chicken stock. Bring to a boil, then turn down to a simmer. Simmer for 20 minutes.

Strain out the vegetables. Return the stock to the dutch oven and bring to a low boil.

Whisk in flour and cook cook another minute or two, until thick and bubbly.

Whisk in beer, cream cheese, half and half, seasonings and Worcestershire sauce. Bring to a simmer.

Add in shredded cheese, a small handful at a time. Once incorporated, stir in ground beef.

Continue to cook until heated through, another 5-10 minutes, stirring frequently.

Serve with crumbled bacon and croutons on top and a chilled glass of Bell’s Amber Ale on the side.

Spread onto a single layer on a baking sheet. Sprinkle sesame seeds over the top of them. Press down a little to make sure they stick.

Bake for 10 minutes, or until crispy.